Always on the move

Friedrichshain is colorful, young, vibrant, and individual; this is a neighborhood always brimming with life. The area has seen a continuous upturn for some years now. Countless newbuilds, renovation projects, and changes can be seen everywhere.  Its central location in Berlin, the nearby banks of the River Spree, and the range of leisure and cultural activities offered, are what make Friedrichshain particularly popular. This is the location of choice for newcomers to Berlin, in particular. 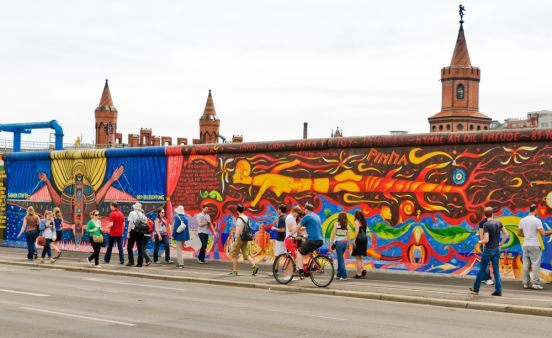 The Friedrichshain-Kreuzberg district takes its name from the Volkspark Friedrichshain. Berlin's first municipal park was created as a recreational area for the densely populated eastside of Berlin and it has retained this purpose to this very day. In summer, it is the venue for barbeques, sunbathing, and simply chilling out. This lifestyle is completely in sync with the relaxed vibe of this neighborhood.

Historically, Friedrichshain is a typical former workers' neighborhood. The traditional period buildings, classic Wilhelminian-era tenements, are now found only in the eastern part, especially around Boxhagener Platz and Simon-Dach Strasse. Now lovingly renovated, they give the neighborhood its characteristic charm. Practical prefab block structures dominate the streetscape of the western parts of Friedrichshain, while its center is characterized by the neoclassical architecture of the early days of the German Democratic Republic. This does nothing to detract from its popularity – Landsberger Allee and Karl-Marx-Allee are also sought-after addresses. Furthermore, new housing is also being built in Friedrichshain, such as the development underway at a prime location by the banks of the River Spree. Friedrichshain remains at the heart of the city and nevertheless close to the pleasant riverside.

The south of Friedrichshain features a number of former port, rail, and industrial sites. Some of the rail constructions are still in use and form an important part of the East-West line through the inner city: Ostbahnhof, Warschauer Strasse and Ostkreuz stations. Meanwhile, some other sites for several years now have been repurposed as a space for art and culture for the city’s youth.

One of Friedrichshain's main cultural highlights is the East Side Gallery. This permanent outdoor gallery on the longest surviving stretch of the Berlin wall is an absolute must, and not just for the tourists. Countless artists have left their mark here and the East Side Gallery is famous over the entire world.

The nightlife in this neighborhood is equally renowned; after all, Friedrichshain is one of the hippest areas in Berlin.  Simon-Dach-Strasse is particularly in high demand. Following the fall of the wall, and the subsequent modernization and renovation work, this once-quiet residential street has been transformed into a lively and popular café, bar, pub and restaurant strip. As soon as the weather allows, the eateries and cafés spill out onto the sidewalk. The wide sidewalks, the old trees, and the traffic calming measures make it all the more pleasurable. The selection is great, the offering wide – you only have yourself to blame if you can’t find something that tickels your fancy.