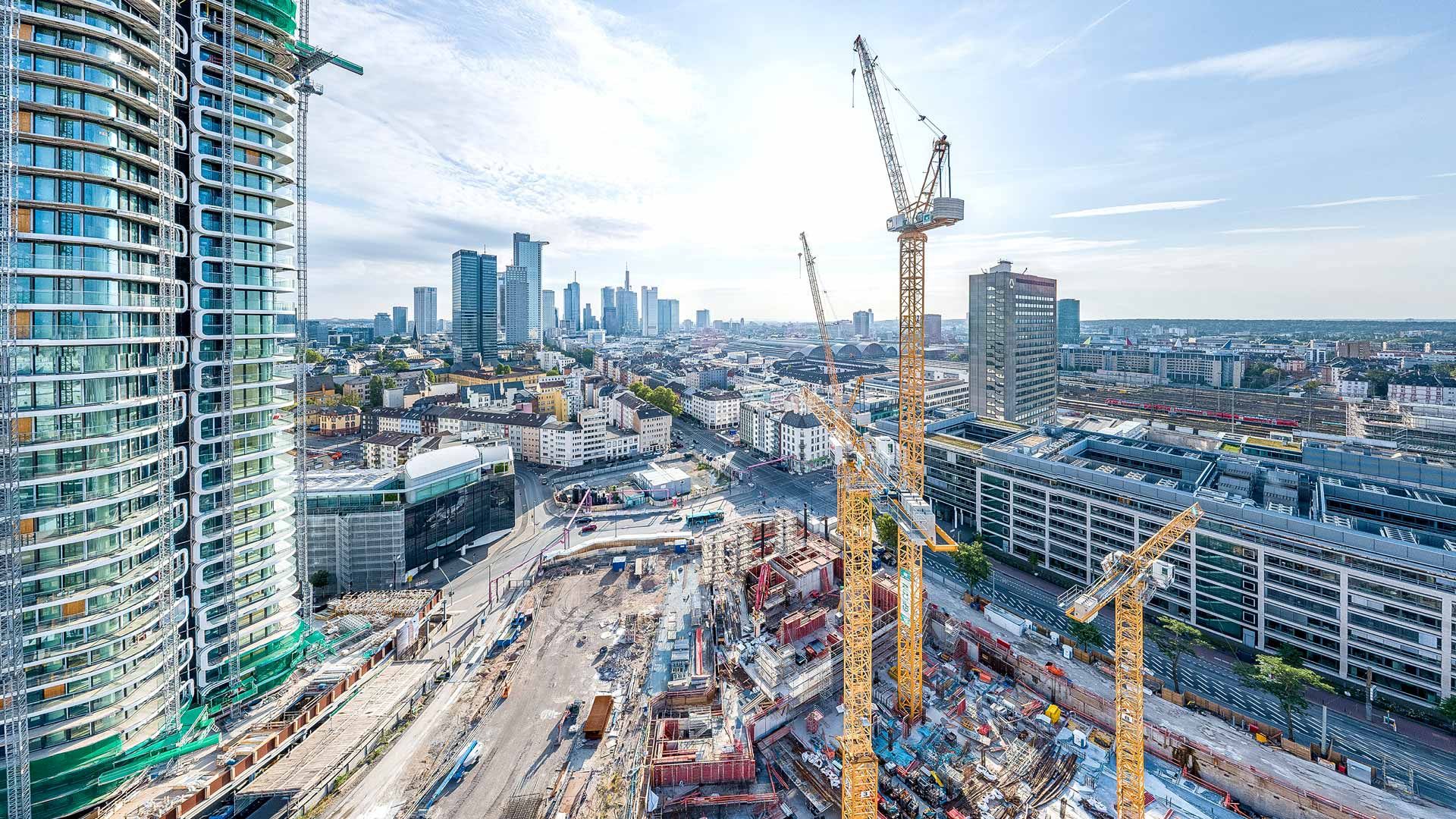 10,000 new residents and more than 30,000 jobs in an area the size of 160 football pitches, Frankfurt’s Europaviertel is among the world’s largest and most impressive urban developments. In combination with outstanding accessibility and transport connections, Europaviertel has already established itself as an ideal location for companies and investors in the heart of Frankfurt.

There’s no doubt about it, Europaviertel is a one-of-a-kind development. Nowhere else in Europe is such a large, city-center area being so completely redeveloped. In 2005, construction began on this former freight station site. Within just a few years of the site’s initial development, almost all of the building plots have been snapped up and numerous buildings have already been completed. An extension of Frankfurt’s U5 subway line is also nearing completion, which means Europaviertel will soon be connected to the city’s extensive (and efficient) public transport system. Even today, the location of Europaviertel in downtown Frankfurt simply can’t be beaten. It’s just a short walk to the central railway station, while the international airport is less than 15 minutes away via the nearby highway on-ramp. Everything close at hand: retail, hotel and recreation

Exceptionally close to Frankfurt’s city center and world-famous banking district, Europaviertel has already attracted a host of companies, hotels and retailers to fill the new buildings with life. One of Europaviertel’s highlights is Skyline Plaza at the entrance to Europa-Allee, which has almost 130 attractive retail units and restaurants, together with unbeatable panoramic views of Frankfurt’s skyline. Given its proximity to Frankfurt’s trade fair and exhibition grounds, it’s also no surprise that so many international hotel brands have flocked to Europaviertel, including Hilton, Mövenpick, Meininger and Motel One. In addition, a wide range of doctors and physiotherapists have opened practices across the new quarter. Fitness enthusiasts will perfectly at home in the Meridien Spa & Fitness and the EMS Lounge Frankfurt-Europaviertel. Then there’s the attractive embankment along the Main River, which is within easy walking distance, as is the Rebstockpark with its indoor swimming pool.

Europaviertel is also a coveted office location: Major companies and associations, such as Deutsche Bahn, DHL, the Kassenärztliche Vereinigung Hessen and the construction giant Züblin, have all taken up ultra-modern office space in Europaviertel. By the end of 2021, the consulting and service company Deloitte will be moving into the Zebra office building, which offers 17,500 sqm of Grade A rental space. Another major development scheduled for completion in early 2022 is the One high-rise, which elegantly combines hotel and office space. The seamless fusion of work, shopping and services also make Europaviertel an extremely attractive residential district. And with Grand Tower, Germany’s tallest residential tower is about to be completed in Frankfurt’s exciting Europaviertel. Then there’s EDEN, a stunning skyscraper, that boasts the highest vertical garden in the world and will be ready to welcome its first occupants by the end of 2021. Frankfurt is certainly reaching for the skies: Praedium, another brilliant residential tower, has already been completed and fully marketed.

The new quarter’s planners not only set themselves the task of creating a well-balanced mix of apartments, businesses and hotels, but also to green recreational areas. In fact, the master plan for Europaviertel received the German Sustainable Building Council’s Gold award in the “New Mixed Urban District” category. It goes without saying that urban development of this size and magnitude is impossible without a certain level of disruption. Nevertheless, 15 years since ground was first broken, Europaviertel is rapidly coming to life: A completely new and cosmopolitan urban quarter that effortlessly combines the highest quality of life with a well-balanced mix of uses and innovative, world-class architecture.