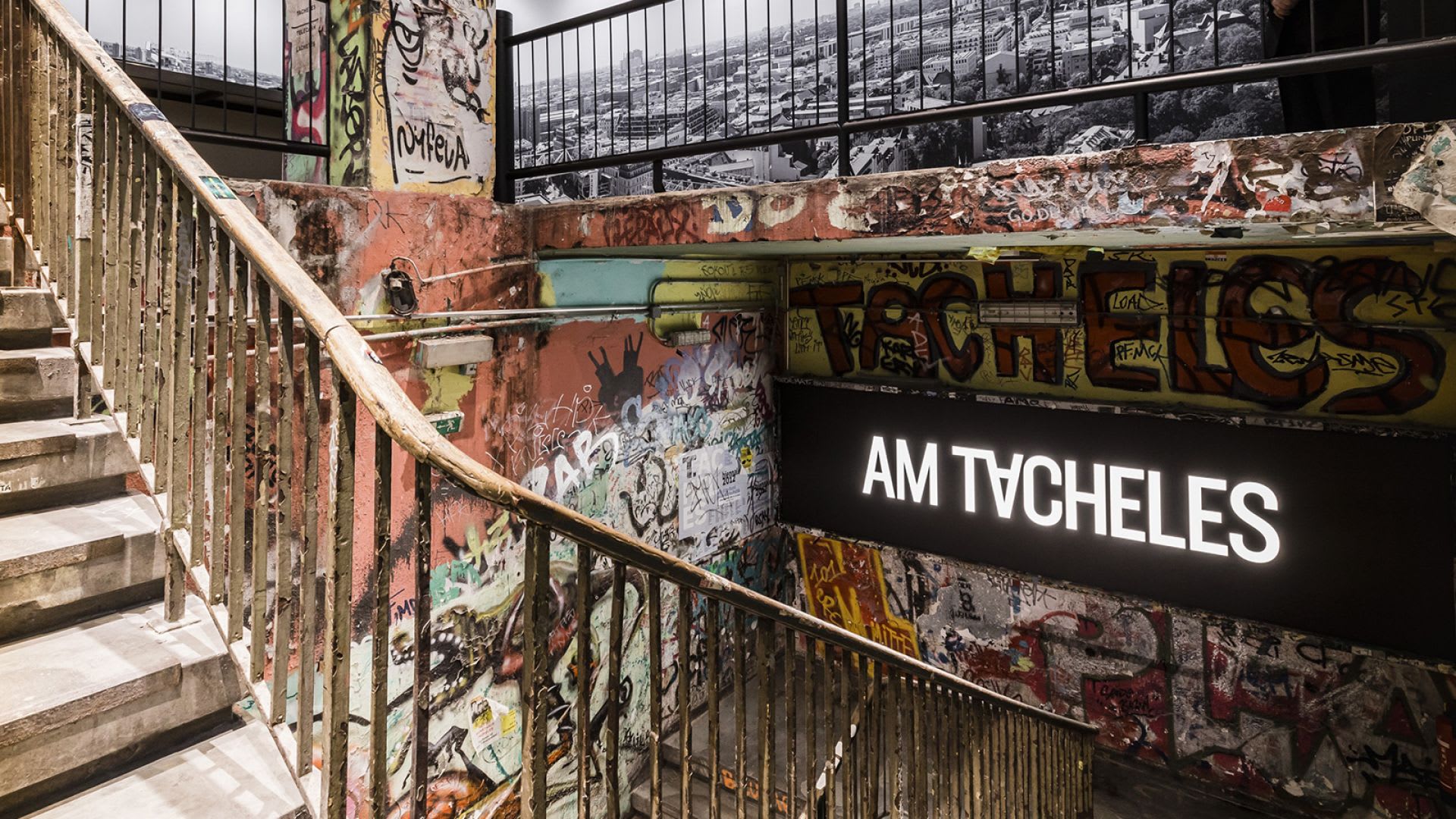 You have almost certainly heard the saying that claims “a cat has nine lives.” Well, you could probably say the same for the area around what used to be the Kunsthaus Tacheles art center at the intersection of Friedrichstraße and Oranienburger Strasse in Berlin-Mitte. In fact, the site has already enjoyed nine lives: as the Friedrichstraßenpassage department store, as a show room and House of Technology by the electrical company AEG, as a prison, as a school for artists, as the headquarters of the Free German Trade Union Federation, as a dance school, as a nightclub, as a cinema, and finally as an art center. Now, the site is about to embark on its tenth life as a new urban quarter. Given the excitement surrounding Am Tacheles, we thought we’d delve into the site’s eventful history to uncover five astonishing yet less widely known details just for you. The Friedrichstraßenpassage’s distinctive architecture is widely accredited as being a preeminent example of what became known in German architectural circles as the “Cyclopean style.” Based on designs from the architect Franz Ahrens, the five-story reinforced concrete structure was constructed between 1907 and 1909, cleverly combining the hallmarks of both a department store and a shopping arcade. The numbers alone underscore the colossal nature of the undertaking: 10,000 square meters of floor space, a 150-meter passage and a 48-meter-high domed room with a diameter of 28 meters. It was the building’s monumental scale that earned it the moniker of “Cyclopean.” In German architecture, the Cyclopean style describes architecture that eschews traditional standards and embraces large-scale physicality.

Measuring 21,000 meters, Europe’s longest pneumatic tube system served a central point-of-sale terminal with 150 cash registers in the Friedrichstraßenpassage. This was a particularly innovative concept at the time and allowed many stores to join together as a retail association and conclude their sales at a central terminal. Using air pressure, cartridges with money and receipts were sent to the central cash desk in a matter of seconds. After a sale was logged, the customer’s receipt and change were then transported back via the same system. In architectural terms, the stores also overlapped, as is usually the case in a passageway, and their sales and display spaces merged into one another. However, the innovative business model developed by Otto Markiewicz wasn’t enough and the Friedrichstraßenpassage failed only six months after opening. In 1909, the department store mogul Wolf Wertheim rented the complex and transformed it into a department store that would last until 1914. Among the Friedrichstraßenpassage’s absolute highlights were its special halls. These were designed to give tenants the perfect spaces to present their wares. These unique showcases included the Blue Hall, whose walls were partly covered in blue velvet. The hall’s ceilings soared to an impressive 7.5 meters high and the upper section of the hall was covered with modern Silhyo panels made of porcelain enamel. The high-end interior was rounded off with a bronze bay window, ceiling frescoes, wooden mosaic windows and windows with lead glazing.
The Red Hall featured floor-to-ceiling mahogany wall paneling and was complemented by a gallery, also in mahogany. This hall also boasted a wooden mosaic floor and a richly decorated ceiling.
The two-story Yellow Hall was named for the pillars supporting the overhead gallery, which were clad in yellow Siena marble. The gallery housed light polished oak dressing rooms for the store’s female customers. Many years later, this Yellow Hall became the Kunsthaus Tacheles theater hall.

The birth of the show room

You probably think of show rooms as something entirely modern. In fact, the show room concept was already popular in the 1920s – in a particularly splendid way. In 1927, the electrical company AEG moved into the former Friedrichstraßenpassage department store and created a show room to display its products and advise its customers. As a result, this monumental building was given a new name, “House of Technology,”  which it kept all the way through to 1945. On the first floor alone, AEG had 20 large display windows. In addition, the building gave AEG more than 10,000 square meters of sales and office space. In special rooms, the company could showcase its entire product range. There was even customer consultation service in a specially equipped lighting demonstration room, while cooking demonstrations highlighted the benefits of the latest home appliances.
After the Second World War, the building served as a school for artists, a cinema and as the headquarters of the Free German Trade Union Federation. In the 1980s, the East German government had the famous domed building demolished. At the time of reunification, the site’s remaining structures were scheduled for demolition, although this was prevented by an artists’ collective, who occupied the site and turned it into an art and cultural center.

A new slice of city

From its early life as a magnificent shopping arcade and department store to twenty years as a near-derelict but vibrant art center, a new slice of Berlin is now being created on the site of the former Kunsthaus Tacheles. Combining living, working and shopping, the quarter’s master plan is the brainchild of the Swiss architects Herzog & de Meuron, who also famously designed the Elbe Philharmonic Hall in Hamburg, the Allianz Arena in Munich and the National Stadium in Beijing.
The new life of AM TACHELES has just begun: Construction work is in full swing and is expected to be completed in 2023.

Click on the links to learn more about AM TACHELES and VERT by Herzog & de Meuron, the first of the quarter’s five stunning residential buildings.

Where science and pleasure meet