The port, jetties, St. Pauli, musicals, Reeperbahn, Kunsthalle – Hamburg boasts so many unique selling points. But the city on the Rivers Elbe and Alster is much more than these major attractions. Hamburg is Germany’s “Gateway to the world” and one of Europe’s most dynamic economic regions.

Thanks to its favorable location between the North and Baltic Seas and the Port of Hamburg, the region has developed to the central hub of commerce between northern Europe, Asia, North and South America and Africa as well as being Germany’s most important center for foreign trade. In 2019, roughly 136 million tons of cargo were handled on the quay of Germany’s largest seaport, including roughly nine million standard containers. This makes the Port of Hamburg the third largest container port in Europe and ranks 19th worldwide. 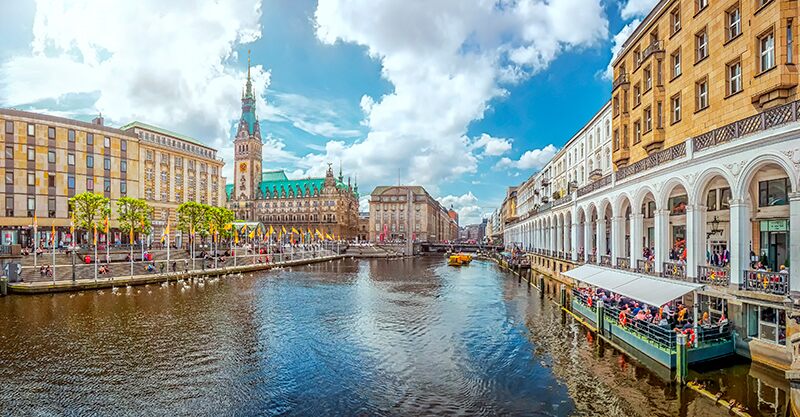 The port as an economic motor

In Hamburg’s metropolitan area alone, almost 156,000 jobs are directly and indirectly linked to the Port of Hamburg and roughly 269,000 jobs in Germany as a whole. The port has developed into northern Germany’s economic motor and into an essential component of the German and European economies. The port creates jobs in many other industries, not just the traditional port industry and economy. The city, also known as Hansestadt Hamburg, has long been the most important trading center for all kinds of goods in northern Europe, and with more than 32,000 trading companies and over 125,000 employees, it is Germany’s largest trading center. In addition, almost 13,000 logistics companies are based in the metropolitan area, distributing goods to the whole world – not only by sea, but also by land, by rail and by air.

Trade and finance are inseparable and they play an important role in Hamburg. With more than 10,000 companies and roughly 50,000 people, the finance and insurance sectors are driving forces in the Hansestadt – which, by the way, is the birthplace of the modern insurance industry. The Hamburger Feuerkasse, founded in 1676, is the world’s oldest insurance company. Hamburg’s economy is dominated by the service sector, which employs around three quarters of all employees.

And don’t forget: Hamburg is the capital of the German wind-energy industry – and next to Seattle and Toulouse is one of the world’s leading locations for the civil aviation industry. Some 40,000 people work in this area, including 12,000 at Airbus and 7,500 at Lufthansa Technik. 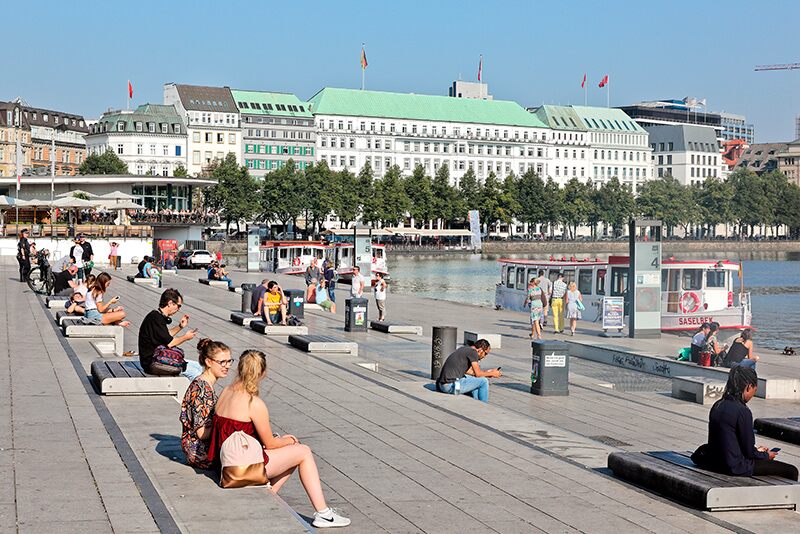 Hamburg is a lifestyle

In the same way as the port shapes the economic structure of the Hansestadt, it also plays a starring role in Hamburg’s lifestyle. The quays in St. Pauli have become one of the city’s most popular promenades and harbor tours are popular for the city’s inhabitants and tourists alike. The city’s many highlights can be enjoyed from the water, on small barges, large passenger ships and paddle wheel steamers. Even before Hamburg’s Speicherstadt had been become a UNESCO World Heritage Site in July 2015, its neo-Gothic brick architecture made it one of the city’s most popular sights. The Speicherstadt is the world’s largest contiguous collection of warehouses and, even today, precious carpets, fine spices and other goods are stored here. Then there is the HafenCity project, which is being developed in phases and is scheduled for completion by 2025. The HafenCity will be home to Hamburg’s newest landmark – the spectacular Elbphilharmonie, a concert hall, which also includes a hotel, cafes, restaurants and condominiums. The next attraction is the legendary museum ship, Rickmer Rickmers, a three-masted barque built in 1896, which once sailed as a cargo ship upon the seven seas. 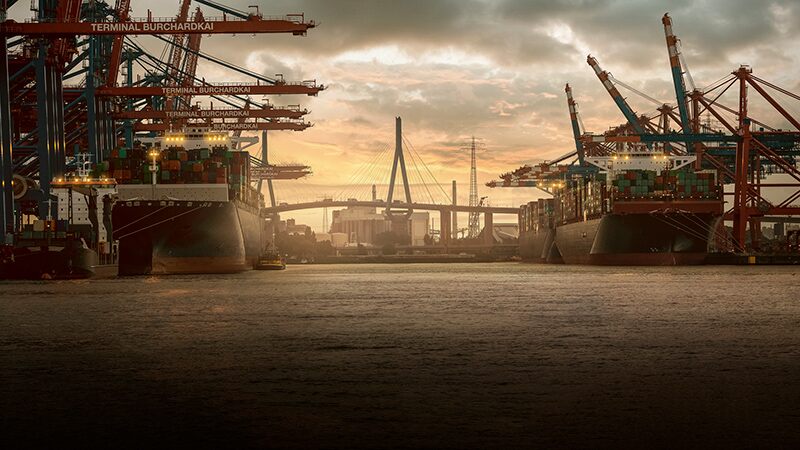 The Copacabana of northern Germany

The Hansestadt is characterized by the maritime lifestyle. This is the only place in Germany where you will find such a unique combination of lively metropolis and seaside living, and the typical, Hanseatic charm. Water plays a vital role in the city – not only for the economy, but also for daily life. Today, Hamburg’s 2,500 bridges cross numerous branches of the Elbe, the Inner and Outer Alster with their many canals, tributaries and innumerable waterways – the city in Europe with more bridges than Venice, Amsterdam and London combined.

Water is also used for sport in the Hansestadt – whether to enjoy a cool dip or along its banks – or just to relax. The Elbe beach is as popular on lovely days as the Copacabana, and one of Germany’s most beautiful hiking paths runs along the Elbe’s banks to Blankenese, and the Alsterwiesen invites you to stroll along its tree-lined banks.

Hamburg isn’t just for sport and relaxation, it also offers a wide range of entertainment and cultural activities. Germany’s premiere of Cats in 1986 established Hamburg as a place for musicals and since then it has staged many other successful productions, such as The Phantom of the Opera, Mamma Mia and The Lion King. This city, which celebrated the Beatles’ breakthrough in the early 1960s, also has three state theaters, well-known and famous throughout Germany, numerous private theaters, cabarets, music halls, and two world-acclaimed orchestras. The renowned choreographer, John Neumeier, has been staging successful performances with the award-winning ballet of the Hamburg State Opera for over 40 years. About 40 museums in the Elbe metropolis are dedicated to various themes.

Growing global city on the water

Hamburg is considered one of Europe’s most beautiful cities. With its unique charm, strong economy and wide range of cultural institutions, the city on the Rivers Alster and Elbe is becoming ever more popular. At the end of 2019, the population of Germany’s second largest city had risen above 1.8 million. The future also looks good for growth in Hamburg. By the end of 2040, the number of inhabitants may reach up to almost 2 million.

No wonder, as so many studies have shown Hamburg to be among the most popular cities in Germany for years now. When it comes to friendliness, uniqueness, attractiveness and growth, the Hansestadt is highly regarded across Germany. An international study by the “Economist Intelligence Unit” regarding quality of life placed Hamburg above other German cities, ranking the city 13th among 140 other cities in the world – ahead of other popular metropolises, such as Paris, Barcelona, Hong Kong and New York.

As the number of inhabitants increases along with the number of households, the growing popularity of the Hansestadt is reflected in its real estate market. The vacancy rate for rental apartments available immediately or within the next few months has rapidly declined since 2006. The previous rate of 2.4 % was reduced to 0.5 % by 2018 and has remained at this low level ever since. This is because the city’s housing stock has only slightly increased in recent years, while demand for apartments rises.

New living space is being created by extending and expanding existing stock, and converting commercial properties to residential. In the long run, this will not be enough to satisfy demand; new neighborhoods have to developed on available lots and other previously unused spaces. For example, this is how the HafenCity, Europe’s largest city construction project, is developing a new city district with office and commercial space and up to 7,000 apartments on a former port and industrial area by 2025.

Prices reflect the fact that demand is outpacing supply. According to JLL’s residential city profile Hamburg, rental prices in January 2020 were 2.8 % higher than the year before. In general, rents in the Hansestadt are above the German average. The highest rental prices are found in the trendy, downtown districts, and central and waterside areas.

Year-on-year, the most substantial price increases were seen in the condominium sector. When compared to the same month in the prior year, purchase prices for newbuild condos had surged by 14.4 percent. Prices are expected to continue rising for the foreseeable future. On the one hand, real estate remains attractive for owner-occupiers as well as buy-to-let investors. On the other hand, Hamburg’s attraction keeps demand high. If the inhabitants are to be believed, the world’s most beautiful city, with its pulsating world port, its special position between two seas and its wide range of entertainment and cultural activities, will remain a sought-after real estate location for many years to come.