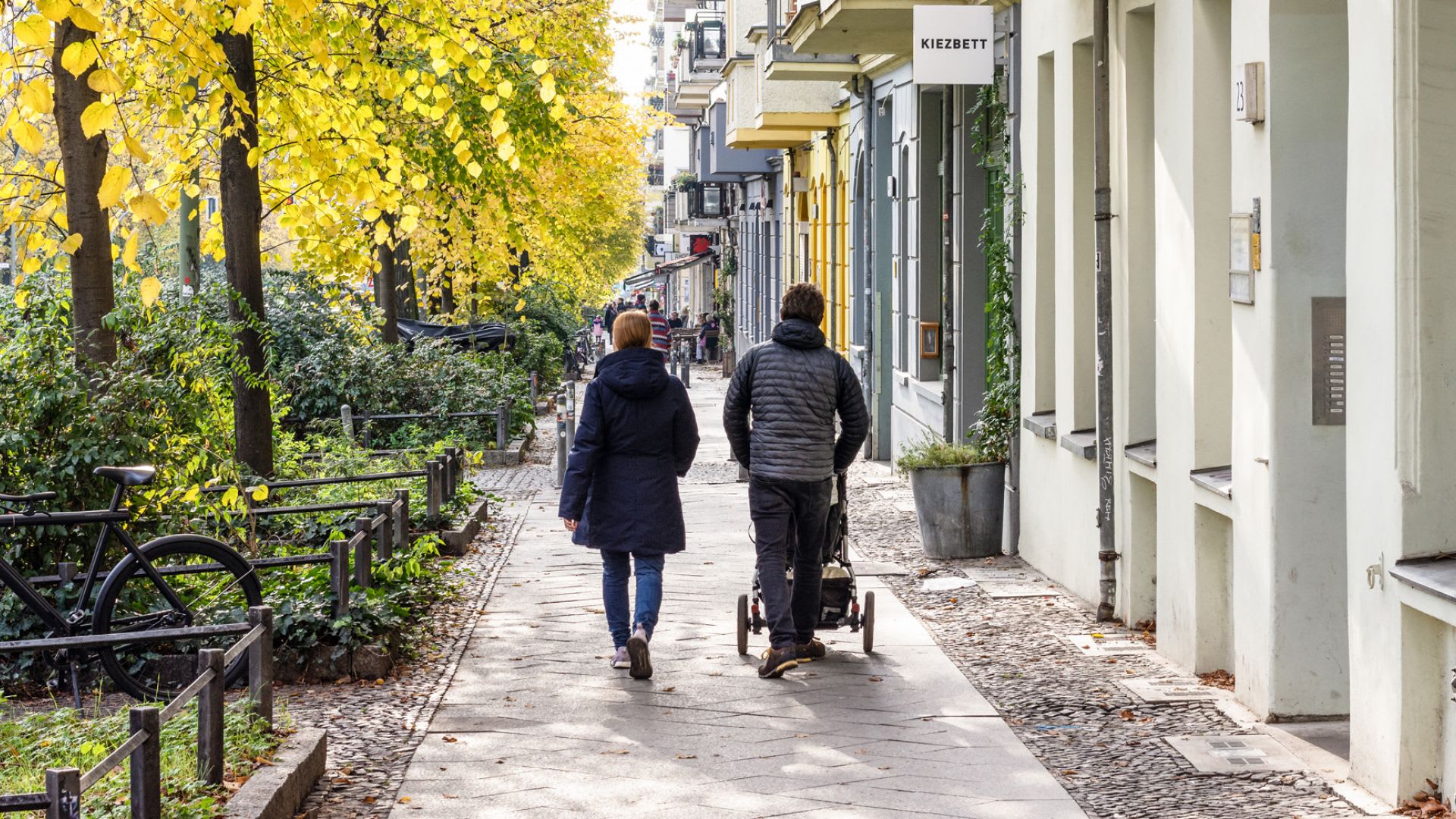 Living in the tranquil Samariter neighborhood

In Berlin, hardly any street looks like another and a surprise awaits you around every corner – be it architectural, cultural or culinary. Friedrichshain is regarded as young and hip, sometimes a bit too party-hardy, but always brimming with a certain East Berlin charm. Nevertheless, it is also worth taking a closer look within this district of 130,000 inhabitants. Friedrichshain is more than just parties and young people hanging out in its municipal park. It can also be a great place for families and anyone in search of peace and quiet.

Award-winning district with a heart for families

And yet, this quiet and relaxed family atmosphere can be found in the Samariter quarter, also known as Nordkiez, located to the north of Frankfurter Allee and around Samariter Church. There are a host of small shops offering all kinds of interesting and useful things (also for children), as well as cozy little cafés and lots of playgrounds and green areas. From 1993 to 2008, the district was designated a redevelopment area and was awarded the National Prize for Integrated Urban Development and Building Culture by the Federal Ministry of Transport. Eventful history and center of the peace movement

The heart of the quarter is the Protestant Samariter Church, which was built in 1894 and exemplifies the region’s typical red-brick architecture. The church played a major role in the GDR’s opposition movement from the end of the 1970s. Pastor Rainer Eppelmann and musician Günter Holly Holwas organized blues masses here from 1979 to 1986. More than 250 young people attended the first mass in June 1979 to protest the communist regime. State leadership tried to ban the blues masses, but the church federation resisted. Only in 1986, after more than 20 of these events, did the church bow to East German politicians and stop the regime-critical masses in order not to endanger the 1987 Church Congress. One of Friedrichshain’s most impressive boulevards

Samariter Church is located in the middle of Bänschstraße, widely regarded as one of the most splendid boulevards in the district. In the middle of the street there is a wide median with many trees, making it a great place for a leisurely stroll. Bänschstraße is lined by magnificent buildings with Art Nouveau facades. Without a doubt, it is an attractive and sought-after residential area where residents enjoy a quiet and relaxed life. A day in the Samariter neighborhood

The ringing bells of Samariter Church, mixed with the chirping of birds – this is the acoustic start to your day in the heart of the Samariter neighborhood. It’s high time for a short stroll. How about a hearty breakfast in the Swabian Bakery, where everything is homemade and down-to-earth? Followed by a little walk around the neighborhood. If you have a children’s birthday party coming up, you are sure to find a great present in the bookstore Libelle. And if you’re looking for something unique to wear, then Berlin Fashion Institute (Berliner Modeinstitut) is the place to go. Then head to Kiezcuisine, a vegetarian bistro, for a breather and some fortification. In less than 10 minutes you can reach Alexanderplatz by subway and dive right into the middle of city life. In the late afternoon, you can escape the hustle and bustle of the city center and return to the tranquility of the Samaritan quarter. You can quickly order a spectacular cake in the traditional confectionery and patisserie Verzuckert, or get together with friends for dinner – tapas with Spanish wines in the Vineria Del Este at the end of the day. Afterwards you can enjoy a nightcap in Revolte Bar, complete with live music. The Samariter quarter – a real haven of peace in the middle of vibrant Friedrichshain.